A character letter is designed to show support for a defendant in a criminal case. These letters have the potential to influence the court, and may even impact the ultimate sentence in a criminal case. A good character letter can be incredibly helpful to a defendant’s case. Writing such a letter can be a challenge, particularly for those who are inexperienced with the criminal justice system. Read on to learn more about how to write a top-notch letter of support.

How do you write a Character reference letter for court?

The character reference for court is to provide the Judge a family member, friend, or co-worker with a written statement on the Defendant’s moral or mental qualities. The letter is commonly provided in child custody and/or drunk driving (DUI) occurrences but may be used in any situation needed where the court should hear about the personality and reputation of the Defendant in order to have the case drawn in their favor.

The letter should be a simple 1-page document stating your experience with the recommended individual as well as why you feel the need to provide this reference. Depending on who you are and how the court views you in consideration of the case it may or may not sway the Judge into using the letter in their final assessment.

Introduction
The introduction should state who you are, how long you’ve known the individual, and why you feel the need to make this recommendation to the court.

Body Paragraph(s)
The body paragraph is your main argument why the recommended individual is a person of high moral character. For example, if you are the employer of the individual it should state how important they are to the workplace and to plead to the Judge to show leniency in this case. Or if it is a child custody lawsuit it should have a family member write how much the kids mean to the recommended individual.

Conclusion
The conclusion should summarize the purpose of the letter and he or she should write their contact information (phone and e-mail) in case the court should want to follow up on any of the information suggested in the letter.

This letter is easy to use. You only have to download it and write in your own information. If this isn't the right letter you're looking for, then take a look at the other cover letters that Bizzlibrary.com has to offer. We have many letters ranging from cover letters to business letters and thank you notes.

Your file provided me a solution for the problem

Great file, provided good example document for what I need 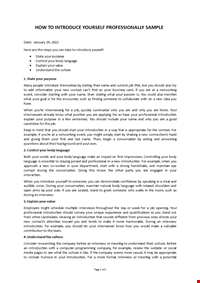 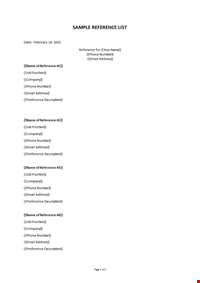 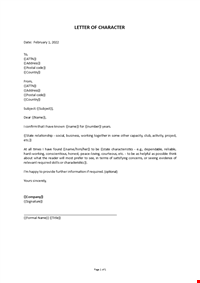